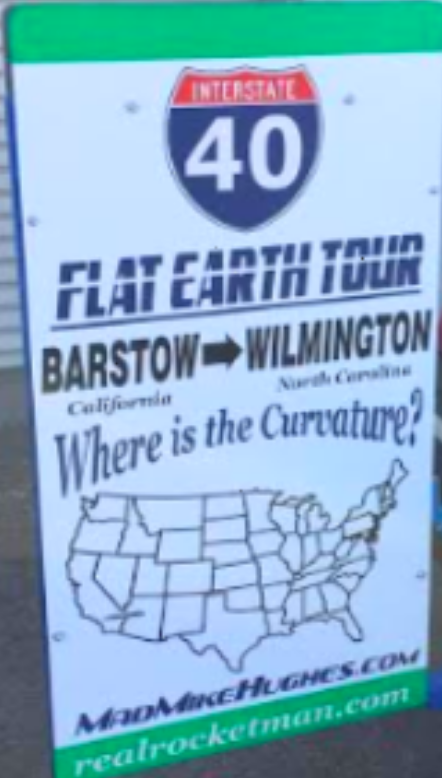 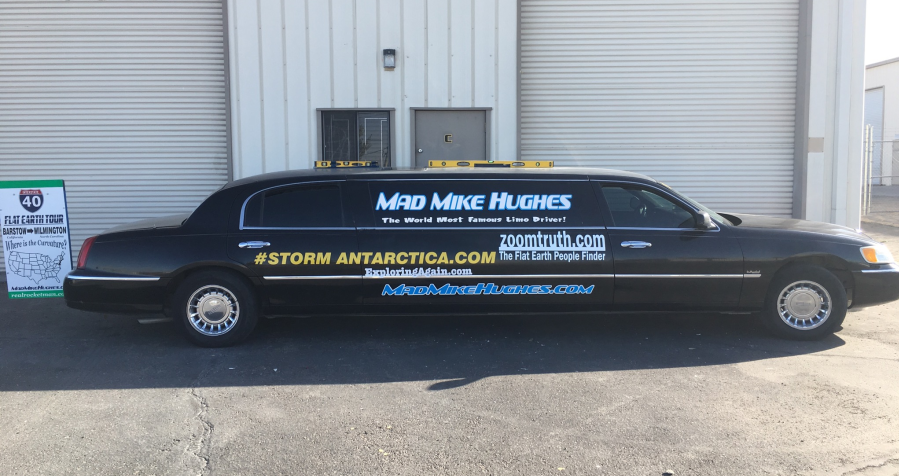 OCTOBER 11, 2019 — For the second time in two years, “Mad” Mike Hughes, the Flat Earther who launched himself 1875 feet into the sky in a home-built rocket, will attempt to prove his theory correct. This time the daredevil is taking his signature limousine on a coast-to-coast trip to measure the curve of the United States.

Flat Earthers claim that the curvature math which tells us how much curve there should be, per mile, doesn’t match up with their observations. “It does not get much flatter than Amarillo,” he said of his proposed globe-debunking experiment.  If the globe curves 8 inches per mile squared, then Interstate-40 would have 700 miles of curvature between Barstow, California, and Wilmington, North Carolina. The limousine, outfitted with an oversized spirit-level, is towing a mobile billboard explaining the concept for the experiment.

This observation is sponsored by the Infinite Plane Society, a flat earth group who believe the edge of the world is really Antarctica.  “We’re the group that put ‘Research Flat Earth’ on his steam-power rocket. This time, we’re putting ‘Storm Antarctica’ on the sides of his limousine,” said IPS spokesman Tim Ozman.

Hughes is also using this trip as a promotional tour for the documentary ROCKETMAN: “Mad” Mike’s Mission to Prove Flat Earth, and he will have DVDs and movie posters for fans at each of his stops.

“Mad” Mike Hughes is an American limo driver, daredevil, and flat-Earth conspiracy theorist known for flying in self-built rockets. In 2002 he set a Guinness world record with a 103-foot (31 m) jump in a Lincoln Town Car stretch limo. His record-breaking steam-power rocket launch can be viewed online at http://madmikehughes.com.

The daredevil is going to be in Albuquerque on Friday, October 11th, at  6pm. Details for meet and greet opportunities are posted at http://madmikehughes.com and http://zoomtruth.com

About The Infinite Plane Society

The Infinite Plane Society is a group of like-minded individuals who have taken The Flat Earth Question further than the Flat Earth Society. They believe that question will be answered definitively and for all time by 2020 when “Mad” Mike Hughes goes to outer space for a first-hand observation or when intrepid explorers independently venture across the Antarctic.